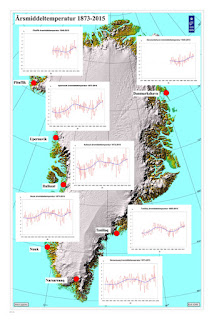 I have recently aquired a technical report from DMI (Danish Meterological Institute) on air temperatures for several location in Greenland. In response to the fairly clear picture these data present I would like to post some observations for the DMI which I believe a responsible journalist ought to pick up and relay - and maybe even ask some critical questions while they're at it (Who am I kidding?).

The reason I surmise is the following:

There has been no significant warming in Greenland since the 1940'es the data shows, an observation likewise born out by DMI's own statement on their research into sea surface temperatures in Greenland coastal regions, where the conclusion tranlates to:

Generally the sediment cores show, that calving has been extensive not only in the first decade of 21st century but also in the 30'es and 40'es of the 20th century. Both periods have seen relavtively mild air conditions and warmer subsurface, sea temperatures, as well as less sea ice.

This happy news however seem to be somewhat absent from press coverage on the topic: Since today in an article in a danish newspaper I could read this amazing statement:

Which roughly translates to:

To the BBC senior scientist Friederikke Otto from Oxford-university Climate research center says, that before the industrial age such a heatwave [in the area of svalbard, east of north Greenland] would have been extremely rare - likely a 1.000 year event.

And as for the DMI? Well, Martin Stendel - a climate & polar research scientist at the DMI -  firmly back up this lady's remarkable assesment, that the warmth can only be explained in terms of human influence on the climate. 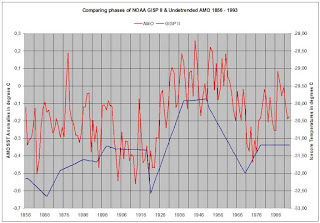 It has become a rule by now, that a climate scientist can say anything to the press and get it on print as a matter of truth (They are the priests - sorry, experts, after all). Unfortunately for Friedrikke & Martin reality bears no resemblence to their claims (priests rarely are in touch with reality - but they don't care: they get to eat steak), and it can be quite easily demonstrated.

To that purpose we must look at the DATA!

To do that we establish a fairly logical correlation between icecore data, seasurface data and airtemperatures in the north Atlantic. Not surprisingly the data show, that the icecores registers warmth in Greenland as the Atlantic Ocean temperatures go up - the air temperatures
follow the same pattern. 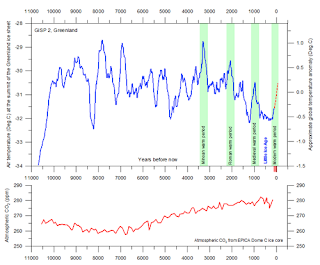 It is thus fairly safe to logically conclude that icecores reflect changes in both sea and air temperatures, and that these temperatures are indicative of heat transported by the ocean waters of the Gulf Stream into the Arctic basins.

Now we can illustrate using the icecores, that the air temperatures on Svalbard are very likely to have been higher at almost any time you care to pick before the industrial era, than they are today.

There are some further conclusions: either the climatologists are incompetent or we are being straight out lied to. It's either that or these people are now so convinced by their own hype, that they've forsaken reality for an oblivious fantasy. You can make your own assumptions about the media, but I think that in general people are becomming aware of the problems with journalists. Unfortunately this is reckless, careless and shamefull misuse of the public trust.