So, it's been nine days since I reflected on atmospheric pressure observations some 4 km aloft, which indicated predictive skills: possibly as much as 14 days in advance.

Meanwhile I've reached a few conclusions: It seems to me, that it is indeed possible to predict, at least in sketch, stormtrack behaviour from examining lofty pressure. I believe the limit is probably 10 days. Since the data is published 5 days late of it's conception, that might give me a lead of 5 days. It's very difficult however to say anything precise about the behaviour on the ground: low pressure systems can easily develop below the high pressure umbrella.

However, there may be a theme to those developments: they seem to cause more wind than precipitation and they die quickly. Why exactly, that would be, if it is true, I don't know, but I can venture a guess: If low pressure systems cannot send winds aloft due to higher pressure above it would inhibit the adiabatic lapse rate. That is: expansion is limited by the inhibited ability to condense water wapour by ascend to higher altitude. The air is recycled lower in the atmosphere and remains moist. This may result in higher wind speeds, lower precipitation rates and higher temperature - though I might be wrong about this.

About predictive skills, I'll try to give an example:

Several things from the animation above should be noticed: First the movement of high pressure into the scandinavian area; remember that this is in a height of 4 km and would not be emmediately felt on the ground (this is the predictive skill foundation). Second thing to notice is the low pressure area emmanating from the labrador sea (NE America). Normally in a NAO+ scenario (which we have), this would move towards iceland, but is deflected by the pressure cell aloft in the North Atlantic towards Southern Europe and North Africa.

This is classic NAO- behaviour, but it is not reflected on the ground (not yet). This low pressure deflection aloft happened between the 1st and the 9th of december. now let's look at ECMWF model for the comming week. These are the start conditions (note: these pick will change every twelve hours and soon be outdated):

The deflection may not yet seem apparent, but there is an opportunistic component to this: As low pressure systems are spawned by the evaporating ocean low in the atmosphere, they  prey on preexisting low pressure conditions higher in the atmosphere to grow by condensing water wapour aloft. This is what we call jetstreams.

By cooling the oceans through evaporation the atmosphere grows warmer and expands due to condensation, and these hotspots of condensation cirkulates the globe doing work on other airmasses, while they penetrate high into the atmosphere draining themselves of water. Probably this convective process of cooling is what renders the greenhouse effect almost mute, because it does not rely on radiation, but mecanical work: any co2 effect simply becomes part of the convective forces and speeds them up by a tiny fraction.

Later the model seems to pick up on the opportunities and lacks thereof provided by the upper atmosphere:

This is about a week from events aloft. There is discrepancy in latitude by maybe as much as 10 degrees or even beyond. I suspect, that implies the faster movement of air aloft, which schews the atmospheric vertical column.

In the Norwegian Sea and Scandinavia low pressure conditions at low altitude is still prevalant and may stay so, since SST's are anomalously high: 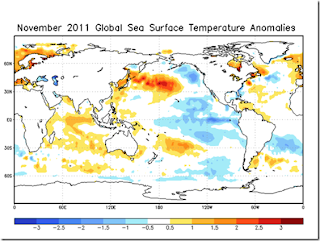 Also the high altitude high pressure block seems to be fading fast, and it's possibly these high SST's, that are wasting it. Never the less: at very high altitude, it's much colder than normal:

As warmth gradually moves out of the Scandinavian region into Siberia, colder conditions may descend on the region and gradually cool those SST's. This would cause snowfall, but I think mostly in the Norwegian mountains.

Thus far, above scandinavia, low pressure has been dominant with prevalant intermitant high pressure and occasional storminess. This seems to agree with the scenario framework outlined above. Colder conditions may descend on Scandinavia within the month. This could either mean more storms or more winter - I'm guessing: a little bit of both.