Today I noticed something for real, which I was probably only dimly aware of - if at all. Maybe it's nothing, maybe it's significant... I don't pretend to know.

The animation to the left is part of an MJO predictor toolbox provided by NOAA. I have long studied it with curiosity, since it is usefull for understanding the polar vortex behaviour.

Now I've noticed something, which truely intriques me. I will first provide you with still images from a Java Animation (Bottom screen), which displays the beginning and end images of an ECMWF model run from 4th of December to 8th of December:

Notice the rather steady low pressure over Scandinavia... Now study this model state on the 11th December:

This is called blocking or an Arctic breakout. It's still not NAO- for a host of reasons, which are irrelevant to this discussion. What is relevant however: Look to the date on the NOAA tool (Fig. 1); it ends on the 30th of November, but it clearly shows the blocking move in the North Atlantic. This, however, is 14 days prior to the actual event as weather on the ground - that is: if we trust the ECMWF model, which in this case I think I do. It will play out differently from current predictions, but the breakout will happen. 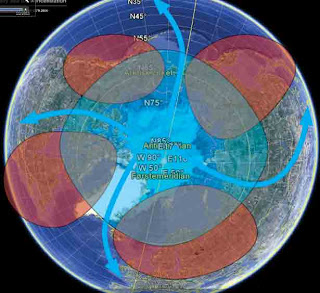 I'll be making more comparisons between NOAA's observations of the atmosphere and the model predictions in the future. I mean: this could be a powerfull predictive tool. DMI now locally predict -10 degrees C in Copenhagen around December 13th, but this was not in the cards 48 hours ago. It will possibly turn out to be overestimation by 2 - 3 degrees C. That would be typical of this model: first it underestimates (24 hours ago), and then it overestimates, accuracy is never achieved beyond 72 hours. By the same token precipitation estimates can only be described as weird.

Last year pretty much the same cirkulation (Eastern Siberia & North America heating up) resulted in some 30 cm of snow and -9 degrees for christmas, which is a very rare event here. If this keeps happening - it hasn't been a regular phenomena for 20 years, now - I'll take it as a sign of a cooling North Atlantic in response to the negativ PDO.