In the next weeks the weather over much of the world is going to change from a (relatively) warm and moist climate to a cooler and rainier one. The jet stream travelling over the north Atlantic Ocean will be split in two. Directing low and high pressure systems away from a warming zonal (east/west) transport mode into a cooling meridional mode (south/north). This at least according to simulations (And we all know how much we can trust simulations – right?). Well, no matter the outcome it provides me with some illuminating graphical presentations – courtesy of the Danish Meteorological
Institute. Here’s the outline: 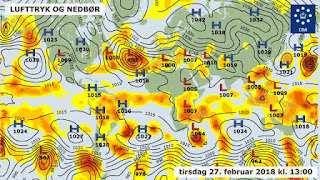 
South Atlantic mode: The high pressure system located roughly at the Azores Islands will weaken and displace west towards the Caribbean and the Mexican Gulf - suppressing low pressure convection in that region – while being replaced in the east by a low pressure system, that will replace the suppressed (high pressure easterly trade winds) convection regime in the Mediterranean Sea with an enhanced one.

In effect this is a reversal of the warming regime which transports equatorial waters into the arctic: This atmospheric meridional mode of transport translates into a southerly shift of the ITCZ (Inter Tropical Convergence Zone -: The location of warm equatorial surface waters), because the placement of a low pressure system by the Azores Islands essentially reverses the direction of the trade winds enhancing the Northwest African monsoon system by pushing warm equatorial waters south along the African plate boundary. A statistical enhancement of this regime on decadal and centennial time scales will suppress the ability of the North Atlantic gyre systems (circulating ocean currents subject to wind regimes) to transport equatorial surface waters into the arctic (the AMOC: Atlantic Meridional Overturning Circulation).

Further: Due to the plate configuration of the South American continent it causes a split of the equatorial zonal transport of warm water currents caused by easterly trade winds and the general circulation of the Atlantic central gyres: One moving south along the plate boundary into the Circumpolar Current around Antarctica another into the Caribbean gyre systems up the the east American coast and into the North Atlantic and eventually Arctic gyre systems. Consequently, a southerly shift of the ITCZ will effectively direct more warm water to the circumpolar current due to the splitting caused by South America and hence lesser amounts can be attributed to the North Atlantic section of the AMOC.

The warming and cooling regimes of the North Atlantic which on decadal, centennial and millennial timescales have numerous causes and effects and translates to the dominant mode of the AO (Arctic Oscillation) are documented in the Greenland Ice-cores; by which you can almost set the clock for civilizational collapse and migrations of peoples. The general effect of the AO, which is a product of temperature regimes in the arctic serves to displace the climate zones north/south and thus historically - and constantly - have moved peoples which survival technologies were adapted to certain climates: just like other animals, and plants as well, we have danced to the rhythm of climate change trough out our history. 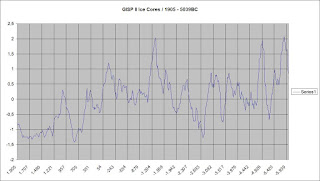 All dates are subject to margin of errors but should be fairly correct within ca. +/- 100 years.